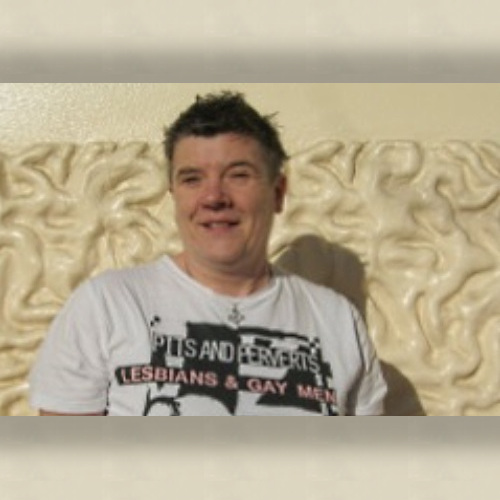 I am a queer, genderqueer human.  I am a pagan and an energy-worker.  I have been leading rituals and running pagan workshops for over 30 years.  Currently I lead 'This Land Sex Magic' and other energy-related workshops.  I have been an lgbt activist and organiser since the early 1980s and am also a peace, environmental and inclusion activist. I am the author of 'Queer Deity, Sacred Slut'

In all my work my emphasis is on humans reconnecting with the land and ending/healing the destruction that we have inflicted on it, and upon ourselves, through our disconnection.

I have been involved in 'camps' and festivals since 1990.  I was a main organiser in 'Spiral Womens Camps' and have been part of organising 'Queer Pagan Camps'(QPC) since 2002 and 'Albion Faerie' gatherings for the last few years.  I co-ordinated Site Crew at QPC for 2 years running. I have worked at many festivals: performing, working in children's areas and working in the Queer Dome, a space for lgbtq people.  I have worked at the Accessible Camping Area at Glastonbury Festival, and have co-ordinated the Accessible Camping Space at the Green Gathering.  I've been Access Co-ordinator at QPC and other spaces, including Re-evaluation Counselling (RC) events. I'm a certified RC teacher.

I am a performer in static trapeze, physical theatre, music and Fooling.  In 2011 I created and performed in a solo show, 'Are You Talking To Me'.  I teach theatre and static trapeze and have produced community circus shows of up to 60 (mainly young) people.  In 2006 and 2007 I produced and performed in cabaret-type shows, 'Tarquin's Closet' and 'Further Tales From The Closet' for 'QUIP' (QUeers Into Performance) in Plymouth.  I've also produced and compared cabarets at other events, including QPC and Quintasensual Festival in 2015.  I've been involved in many other 'not-for-profit' organisations and have been treasurer of two.