Gay Priests in the Vatican – a response from Queer Spirit

Is anyone surprised that so many Christian priests are gay?

Reporting on this, the New York Times tells us: “Fewer than about 10 priests in the United States have dared to come out publicly. But gay men probably make up at least 30 to 40 percent of the American Catholic clergy, according to dozens of estimates from gay priests themselves and researchers. Some priests say the number is closer to 75 percent. One priest in Wisconsin said he assumed every priest was gay unless he knows for a fact he is not. A priest in Florida put it this way: 'A third are gay, a third are straight and a third don’t know what the hell they are.'” 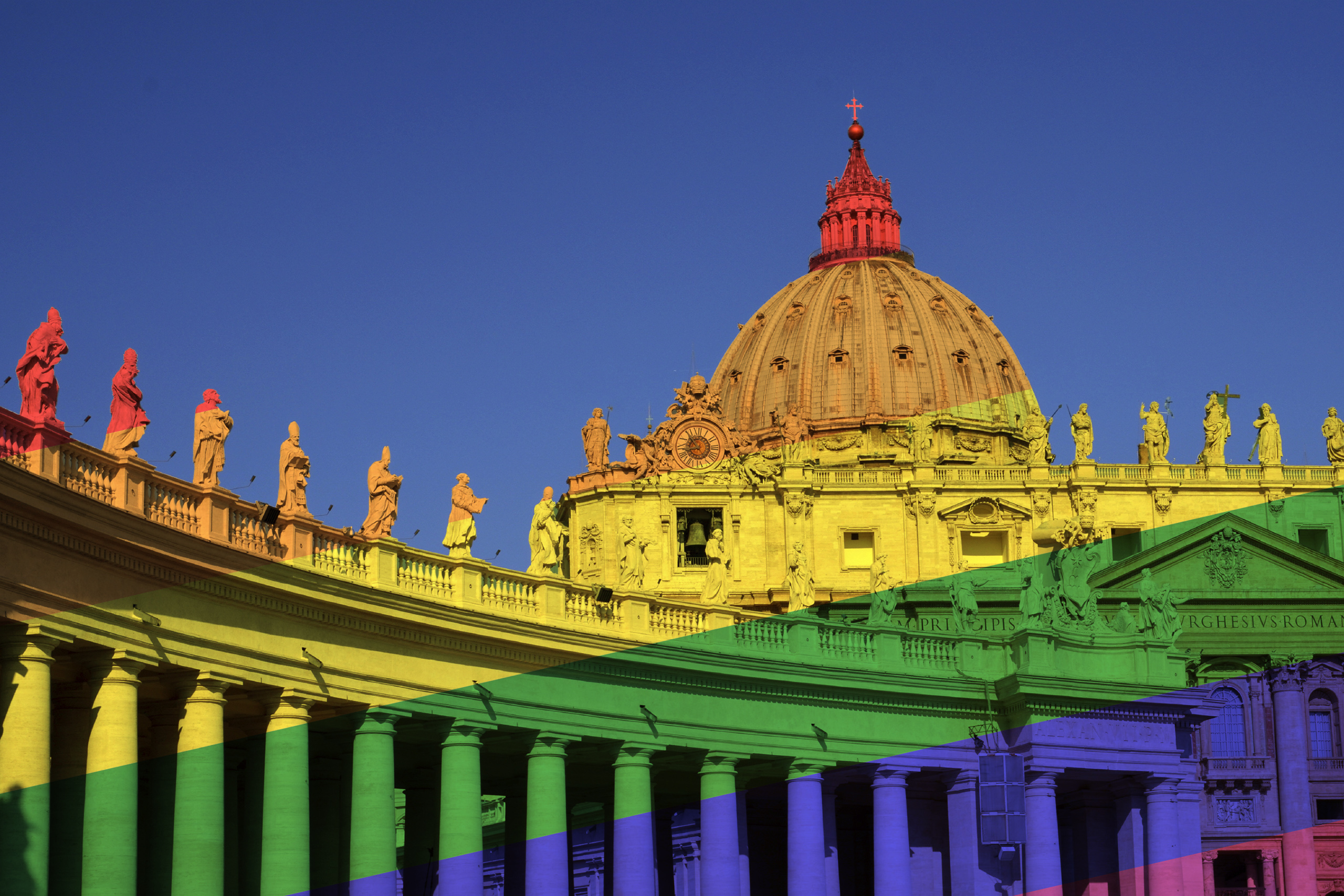 Roman Catholic church leaders have long insisted that 'homosexual tendencies' are 'disordered'. Similarly, the Church of England has worked itself into a mess on this subject – a tendency towards more liberal and open attitudes in the UK and American congregations is confronted by the firmly homophobic stance of many Africans, who singularly fail to realise that it was homophobia, not homosexuality, that the Christian Europeans imported into their continent.

It's about time this debate ended. Consider these points -

The oldest priesthood on the planet, with records going back to the 3rd millennium BCE, are the Gala servants of Inanna in ancient Sumeria, who practised song, lamentations and sodomy in her temples. The cunieform symbol for the Gala translates as penis-anus.

Historian Will Roscoe wrote in From 'Priests of the Goddess: Gender Transgression in Ancient Religion (1996) “At the time of the birth of Christ, cults of men devoted to a Goddess flourished throughout the broad region extending from the Mediterranean to south Asia.” The entire history of the persecution of queer sexuality by the male God worshipping Hebrews, Christians and Muslims comes from its association with the Goddess faiths, which they sought to supplant. In the Old Testament we find the Qedesha – sodomising priests of Asherah who served in the temples, whose practices it took the Hebrew rulers 400 years of violent persecution from 1000 BCE to stop.

In fact sodomy was once associated with magical and religious practices throughout the world – not only in the Goddess temples of the ancient Mediterranean, but also around the planet. Among the Native Americans, where the shamans were named 'berdache' by the Europeans because of their dress, sexual behaviour and same sex relationships. Berdache was a word for the passive partner in sodomy, and the term stuck until the 1990s, when the shamans chose the word 'Two-Spirit' to define themselves.

In Islam, Sufism in particular saw love of men for men and boys as gateway to divine consciousness. Rumi in the 13th century is the greatest example of this, but the practice went on until the 19th century.

Buddhist monasteries were also havens of homosexuality – European Jesuit explorers were horrified to find that the population had no problem with this and even considered homosexuality to be a privilege of the monastic classes.

In ancient Europe, the most notorious of the wild, queer Goddess worshippers were the Gallae priest/esses of the Great Mother Cybele, whose worship goes back at least 6000 years in the Anatolian part of Turkey. The first records we have of her long-haired, raucous self-castrating priests is when they arrived in Greece from around 600 BCE. The Romans brought Cybele to Rome with great ceremony around 200 BCE, building a great temple to her, but not allowing the crazy Gallae into it. They lived in their own communities and travelled around bringing ceremonies of ecstatic worship to the people. As Rome conquered the lands around the Mediterranean Cybele worship, and the gender-bending priests spread, even as far as London.

Coming to modern times, 19th century pioneers of gay consciousness were sensitive to the spiritual aspect of our nature. Edward Carpenter, Walt Whitman saw gay men, women and 'intermediate types' as pioneers of a new love-centred consciousness, with a crucial task ahead – to restore the holiness of the body and of sexuality, which had been turned into something dark by Christianity.

20th century visionaries have sensed this also. Radical Faerie founding father Harry Hay said, “Our beautiful lovely sexuality is the gateway to spirit. Under all organised religions of the past, Judaism, Christianity, Islam, there has been a separation of carnality, or shall we say of flesh or earth or sex, and spirituality. As far as I am concerned they are all the same thing, and what we need to do as faeries is to tie it all back together again.”

Growing on the sidelines of modern gay life, the Radical Faerie movement is a global network of queers exploring spirituality, consciousness and community. Faeries treat the 'gods' as the ancient pagans did – as inspirational guides who open the gates to the spirit worlds, not as rule-giving tyrants who must be obeyed.

The third Queer Spirit Festival, coming up in August in the UK, is a gathering of 500+ queers of all genders, ages and religious backgrounds for an exploration of our spirituality beyond religious dogmas and demands. Queer explorers of consciousness and spirit, be they pagans, tantrics, energy healers or anything else – beyond religion, beyond creeds, queer spirituality honours the mystery and magic of existence, recognises we live in a multi-dimensional universe, and sets about delivering a direct experience of humanity's place in the whole, and in so doing restoring the natural priesthood of queer kind.

The Roman Catholic church has persecuted same-sex love for over 1500 years, yet still there are many gay men in its priesthood – surely this is proof enough of the spiritual nature of homosexuality.

Sexual abuse scandals in the Churches, which certain religious figures love to blame on gay men, are the result of its virulent repression of all forms of sexuality. Repression of the natural and necessary sexual energy within people of any sexuality can lead to abuse. Healthy sexuality is based on mutuality, respect and consent: at Queer Spirit Festival we celebrate the joy of consent, of communication, of sex enjoyed as a sacrament shared between souls, with a programme of activities in the Sacred Sexuality Temple.

More proof, of a very different kind, is the grip that chemsex has on the gay men's sex scene – the search for transcendent states, sexually charged ecstatic states, is not yet understood – but a glance at the medicine-using, gender-bending shamans of the tribal peoples of every continent gives the clue. Horrific tales of abuse, addiction and self-destruction have been coming out of the chemsex underworld for years now, yet more men are drawn into that mysterious underworld all the time. Chemsex dominates the cruising culture in some cities now, gay culture could shift in a healthier direction if it embraced the shamanic use of cannabis, mushrooms, lsd, ayahuasca etc.

Queer Spirit brings together teachers, facilitators, performers and activists to create a 5 day celebration of the creative, pioneering spirit of the global LGBTQ+ community. The festival will feature speakers and facilitators from the psychedelic community as well as from pagan, Buddhist and other spiritual paths. Queer Spirit celebrates the body, sexuality, gender fluidity and the potential in Queer to break down the religious walls that separate people, that made our queer love into something maligned and misunderstood. We are reclaiming the beauty and magic of Queer souls and our forgotten historical roles.

Of course there are vast numbers of gay clergy in religion. Queers are a magical, mystical segment of the human race. We used to run the temples – and we've been hiding in the churches for a very long time. At Queer Spirit Festival we are coming out about our spirituality, the magic we bring to the world, our potential as soul healers for the human race. Queers have been persecuted by some religions for centuries, but the spiritual power in us, once acknowledged in cultures the world over, is rising again.