At Queer Spirit Festival we celebrate the loving, spiritual nature and gifts of LGBTQ+ people across the world – but rather than encourage lots of people to fly around the planet to the UK we hope to influence the global understanding of queerness by inviting our asylum seeker and refugee sisters and brothers who are already in Britain from Africa, the Caribbean and other places where we suffer persecution. 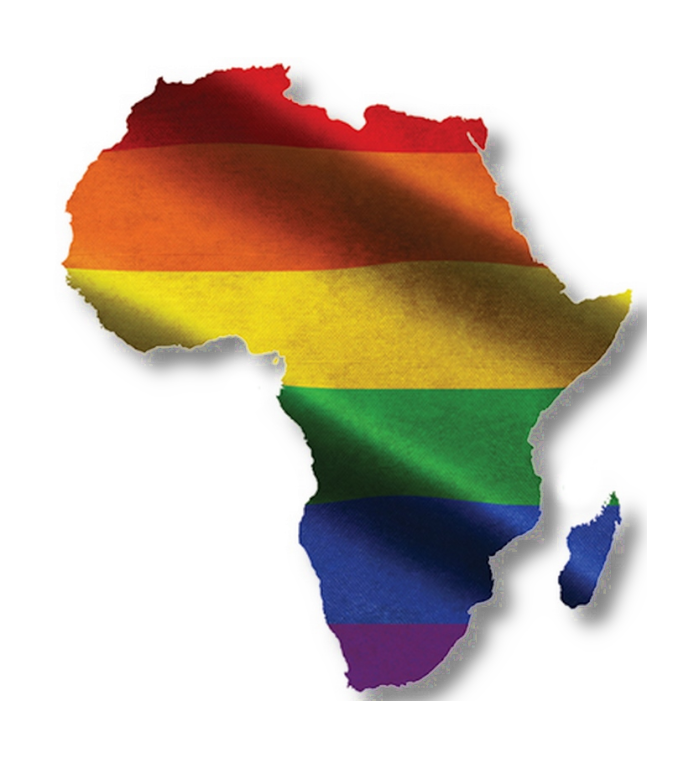 We are offering free festival tickets to members of Micro Rainbow and the African Rainbow Family, two organisations that work hard to support LGBTQ+ asylum seekers, and are pleased to be able to offer them a chance to enjoy the English countryside, the company of a few hundred pioneering queers and all the activities on offer at the Festival.

A frontline of the battle for love and acceptance of LGBTIQ+ people is in Africa. African Christians condemn homosexuality as an import from western culture, completely missing the irony that it is Christianity and homophobia that are the real foreign invaders. But perhaps there is some truth in the claim that 'homosexuality' as a concept did not exist in pre-Christian Africa because the African people were not as limited in their thinking as to define a person by their sexuality:

“...homosexuality is seen very differently that it is seen in the West, in part because all sexuality is spiritually based. Taken away from its spiritual context, it becomes a source of controversy, and can be exploited... The words gay and lesbian do not exist in the village, but there is the word gatekeeper. Gatekeepers are people who live a life at the edge between the worlds – the world of the village and the world of spirit....

"Gatekeepers hold keys to other dimensions.  They maintain a certain alignment between the spirit world and the world of the village. Without them, the gates to the other world would be shut..."

Sobonfu Some, Dagara Tribe quoted from 'Spirit of Intimacy'

Note the frequently recurring links between same sex love and spiritual power as the rich queer history of Africa emerges….

“The indigenous cultures of South and East Africa have a long history of homosexuality, transgender behavior, and even same-sex marriage between both men and women. In early seventeenth-century Luanda (the capital of Portuguese Angola), Catholic priests Gaspar Azevereduc and Antonius Sequerius documented third-gender natives known aschibados. The chibados dressed like women, spoke effeminately and married other men “to unite in wrongful lust with them.” More shocking to the priests was the fact that such marriages were honoured and even prized among the tribesmen. In a similar record, Portuguese Jesuit Joao dos Santos wrote in 1625 that the chibados of south-western Africa were “attyred like women, and behave themselves womanly, ashamed to be called men; are also married to men, and esteeme that unnaturale damnation an honor.” In his writings about seventeenth-century Angola, historian Antonio Cardonega mentioned that sodomy was “rampant among the people of Angola. They pursue their impudent and filthy practices dressed as women.” He also stated that the sodomites often served as powerful shamans, were highly esteemed among most Angolan tribes and commonly called “quimbanda.” http://amarawilhelm.wixsite.com/around-the-world/part-8

Dagara: “The gay person is looked at primarily as a “gatekeeper.” The Earth is looked at, from my tribal perspective, as a very, very delicate machine or consciousness, with high vibrational points, which certain people must be guardians of in order for the tribe to keep its continuity with the gods and with the spirits… Any person who is at this link between this world and the other world experiences a state of vibrational consciousness which is far higher, and far different, from the one that a normal person would experience. This is what makes a gay person gay. This kind of function is…one that people are said to decide on prior to being born. You decide that you will be a gatekeeper before you are born…To then limit gay people to simple sexual orientation is really the worst harm that can be done to a person.” Malidoma Some http://www.menweb.org/somegay.htm

Azande: “the Azande tribe in what is now the Democratic Republic of the Congo in sub-Saharan Africa use their queerness to instil fear and respect in the eyes of their fellow tribespeople. Lesbian Azande women were notorious for being very open and proud of their queerness, wearing it like a badge of honour. This was because, to the Azande, the spiritual potency of women was seen as often more powerful than that of men. Already at a magical disadvantage, Azande men were particularly impotent to the power of queer Azande women. By having sex with each other, lesbians of the tribe were believed to be able to double their spiritual power, making their magical prowess the most powerful in all the tribe. To show off their spiritual might, Azande lesbians sometimes practiced their queer sexuality in public as a way to let everyone know now had 2x the power they once had.” (Tomas Prower https://www.llewellyn.com/journal/article/2696)

“In southeastern Africa, Bori cults—along with their crossdressing shamans and possession rituals—are still quite common among the Zulu. Shamans are known as inkosi ygbatfazi (“chief of the women”) while ordinary transgenders are called skesana and their masculine partners iqgenge. Zulu warriors traditionally asserted their manhood by substituting boys for women and in the 1890s, Zulu chief Nongoloza Mathebula ordered his bandit-warriors to abstain from women and take on boy-wives instead. After his capture, Nongoloza insisted that the practice had been a long-standing custom among South Africans. Indeed, homosexual marriage was documented among the Zulu, Tsonga and Mpondo migrant workers of South Africa at least since the early nineteenth century. Boy-wives were known by various names such as inkotshane (Zulu),nkhonsthana(Tsonga), tinkonkana (Mpondo)”

“The Meru tribes of Kenya have a religious leadership role known as mugawe, which involves priests wearing female clothing and hairstyles. In 1973, British ethnologist Rodney Needham noted that the mugawe were often homosexual and sometimes married to other men… In 1987, anthropologist Gill Shepherd reported that homosexuality was relatively common in Kenya, even among Muslims (both male and female). Most Kenyans initially discourage transgender behavior among their children but gradually come to accept it as an inherent part of the child’s spirit (roho) or nature (umbo). Shepherd observed third-gender men, known in Swahili as shoga, who served as passive male prostitutes and wore female clothing, makeup, and flowers at social events such as weddings, where they typically mingled with the “other” women. At more serious events such as funerals and prayer meetings, the shoga would stay with the men and wear men’s attire. Other Swahili terms for homosexual men include basha (dominant male), hanithi (young male partner) and mumemke (man-woman). Lesbians are known as msagaji or msago (“grinders”).”

“The Konso of southern Ethiopia have no less than four words for effeminate men, one of which is sagoda and refers to men who never marry, are weak, or who wear skirts. In the mid-1960s, Canadian anthropologist Christopher Hallpike observed one Ethiopian Konso that lived by curing skins (a female occupation) and liked to play the passive role in homosexual relations. In 1957, American anthropologist Simon Messing found male transvestites among the Amhara tribes that were known as wandarwarad (male-female). They lived alone and were considered like brothers to the tribeswomen. The husbands of the women were not at all jealous of the close friendship between their wives and the wandarwarad. Messing reported that the wandarwarad were unusually sensitive and intense in their personal likings. He also found “mannish women” among the Amhara known as wandawande.”

“In the Sudan, traditional Zande culture is well known for its homosexual marriages, even into the 1970s, as reported by British anthropologist Edward Evans-Pritchard in 1971. Some Zande princes preferred men over women and could purchase a desired boy for the price of one spearhead. They would then become husbands to the young man, provide him with beautiful ornaments and address him as badiare (beloved).”http://amarawilhelm.wixsite.com/around-the-world/part-8

The European man exported his homophobia to the whole world, and now in the 21st century western queers are campaigning vigorously to reverse this situation. But once again this can feel to people in Africa and elsewhere like colonialism – the enlightened west telling the rest of the world what to do. Instead, we of the west should be going on bended knee to the peoples of Africa, apologising without end for the wanton destruction of ancient cultures, for the spread of fear and hatred relating to sexuality. Instead of telling Africa what to do we need to be learning from their history and their example. Just as with the example of the Two-Spirits of North America, and the ancient Goddess priest/esses of the Mediterranean world, the queer history of Africa points to an integral association of same-sex loving and transgender people with the sacred, magical, mysterious dimensions of spirit.

At QUEER SPIRIT FESTIVAL we see a change coming in how queerness is understood in the world. What we do in a field in central England can have ripples that are felt the world over. Once again this year we are inviting LGBTIQ+ asylum seekers and refugees to come to the festival as our guests. It's not that we are encouraging people to fly in from around the planet, we think that in this age of climate change that should not be the focus – we know there are many wonderful queer souls from across the globe already here in the UK, due to being persecuted because of who they are. We at the festival wish to invite the whole world to the festival through the people who have already sought sanctuary here in Europe.

PJ Samuel of the asylum seeker group Micro-Rainbow International, wrote to us after the first Queer Spirit, praising the welcome they had been given and “the energies and wonderfulness that was Queer Spirit Festival.

“On behalf of Micro-rainbow International and especially our members who attended I want to thank you for the invitation, facilitation and accommodation by yourself and team that made it happen. It was an incredible experience and all really had a good time while feeling safe and included. Everyone wish it could have gone on. The people, the sessions, the site, the fire, the energies, the energies, really rewarding and rejuvenating.

“Special thanks to all who contributed financially and otherwise to make our presence possible. We trust the universe rewards you all greatly. We who attended have really been enriched.

“Every time a member describes their experience at Queer Spirit Festival they double up on the word really. Really really good. Really really enjoyed it. So, really really, thank you all.”