Harvest was always an anxious time for the farmer (and still is) and for their workers who depended on them for pay, as the harvest could be ruined by drought or by storm and heavy rain. Bringing the harvest home was heavy work, as I know from cutting rye in the glaring sun with a sickle together with old farming couple who befriended us in Crete that same year, and from harvesting hay with lesbians in the South of France: experiences that were precious to me and connect me to Lammas. Or perhaps there is no sun and harvest is brought in dodging rainfall. If it was left too long in the field the wheat could become worthless. So once it was ‘safely gathered in’ there was real relief and joy. 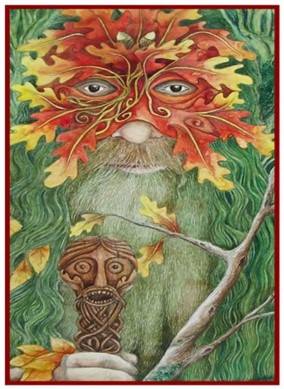 As queer people we also have harvests, whatever our work or study or personal projects. Lammas is a time to celebrate what we have been able to achieve, perhaps in spite of tremendous odds. It has been a horrendously difficult time due to the pandemic, and also due to the political climate and its effect on queer people, especially for trans people of late: ‘bad weather’ indeed. Perhaps we feel nothing has been harvested, but if we search we can probably find cause for some joy to share with others or to have satisfaction in alone. We can appreciate our own efforts and hard work, and relax with those friends we are able to see.

It can help to write down what our own harvest is, and perhaps place this on a Lammastide altar, which can be decorated with symbols of the season. It would be ideal to make bread but a beautiful bought loaf can also be central to the celebration. If you have ever made or bought corn dollies they would grace an altar as would the colours gold yellow and orange which celebrate the corn and the sun. Some pagans celebrate this festival to honour the Irish god Lugh, the bright one who was a master of every craft – and items you or someone else have crafted can be placed on an altar to celebrate the god and congratulate the crafter’s skill. If you are in Wales or work with Welsh deities you could make this a time of honour for the Welsh skilled god Lleu Llaw Gyffes who is related to Lugh. Perhaps you honour Demeter/Ceres and know that the Eleusinian mysteries made an ear of wheat into a symbol of many deeper meanings. Whatever your background. your culture probably has a celebration of harvest and maybe harvest deities that you can honour, perhaps by buying or making bread from your own culture.

For queer people celebration of fertility in folklore and mainstream religion, even in neopaganism, can often be associated with gendered thinking and heteronormativity: because most babies are created by sex between cis gendered female and male humans, this idea of fertility is projected onto all of nature. We of course know babies can be born to trans men, to same sex couples, and to single people but the old notion of ‘fertility’ is still everywhere. In any case nature is tremendously diverse. Wheat itself, as well as many other plants, is pollinated by the wind, and wind to my mind has no gender. Much plant pollination is of course courtesy of insects. The Fly Orchid is pollinated by male digger wasps who find its specialised front petal (which looks like an insect) irresistably sexy so they jump onto its ‘back’ and brush off pollen from a previous orchid they have visited – insect to plant fertility rites! We can create our own Lammas/Lughnasa rituals that defy heteronormativity and prescriptive gender. 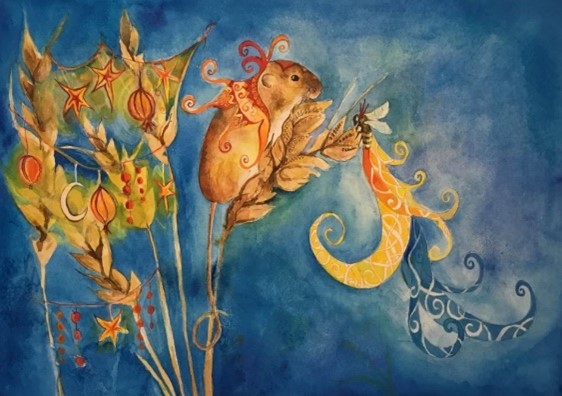 I recently visited the exhibition ‘Ritual Britain’ in the crypt of St Pancras Church, where the artist Ben Edge showed many works documenting folklore customs, and there were also some objects from museums. One of the items I found most beautiful was the ‘kern babby’ – a human life-size wheat being made from a sheaf of corn, tied so that corn ears made its head, and also its arms and hands. It was a giant corn dolly that was made for luck and paraded and used in village ceremonies. Usually this was dressed in a lacey white dress and called the Queen of Harvest, but of course that does not predetermine its gender – there are many queens of all genders! The exhibition’s creator Ben Edge made a kern babby dressed in his own clothes – a white shirt and black trousers. It was powerful and magical to see and remains imprinted on my imagination.

When we work with the energy of Lammas/Lughnasa I think it is important to bring into our rituals blessing for people all over the world – harvests are threatened not only by natural weather variation but by wars and above all by climate change. The future security of the food supply for all of us wherever we live, is of great moment. Those in the poor south will feel this first, and are feeling it now. My Lammas prayer is for a great change so that this the simplest and most important security is pursued by all governments and communities; not profit, not dominance of one group over another, but adequate food for all. We need a reduction of the land dedicated to livestock, so that plant-based food can be grown, as it can feed far more. We need help for farmers in poor countries to protect them from unscrupulous multinationals trying to patent their local plants, from corporations that force farmers to buy expensive seed instead of growing their own. We need an end to the enslavement of humans to grow products such as chocolate, an end to the destruction of habitats to feed the rich world with luxuries. We need to stop the abuse of non-human animals in farming. We need to eliminate food deserts that force the poorest people to rely on processed food. We need farming methods that do not harm insects and plants, we need to save the bees who are bringing us the fruit harvest. We need proper remuneration for farmers the world over, particularly from the supermarket corporations they have no choice but to sell to. We need food justice.

The pandemic has made us more aware of who it is we depend on for our very existence, our daily survival: farmers, farm labourers, all those in the supply chain, sailors and truckers who deliver the food, workers in warehouses, supermarkets and shops, the ones who bring it to our door, workers in cafes and restaurants, cooks and bakers. Most of these people are on minimum wage and may have struggles to feed themselves and their families. Truly food is an international language and magic for its continued profusion has been a cultural theme throughout history.

These are my Lammas spells.

Blessed Lammas/Lughnasa! And may you never hunger. 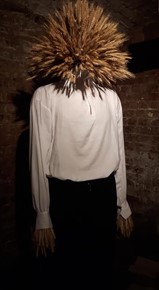