My name is Joseph and I am a Pagan Priest.

I am also a Queer person. 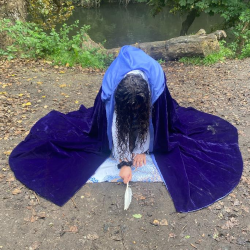 What is a Pagan Priest you might ask? Well, in essence, it’s a choice to dedicate a life, at least in part, to be of service to my community by bringing an opportunity to connect with self, the natural world and the Divine to those who are so inclined. “Priest” is just another word. Many people who do what I do, do not choose that particular label. I did spend a couple of years training as a Priest within a Pagan community, but this is not the only route to this path. More about that later.

I started on my journey with spirituality at about 15, I am now 35. At the time, being a Baby-Witch gave me a sense of empowerment, purpose and strength. As a queer teen I had the usual experience of many queerlings, a sense of being different, having to find myself in a world that tells me to conform, navigating fear and bullying and also, the joy of discovery. Identifying as a Witch meant I had to come out of two closets, the queer closet and the broom closet. Truly, I believe that rather than complicate the matter of finding myself and expressing that to the world, the intersection of my queerness and my paganness supported and strengthened these two complementary parts of who I am. Queerness can correspond to encountering challenges, especially at a young age, but to believe I could overcome anything with just the right combination of crystals, herbs and words certainly gave me courage.

Fast forward twenty years and my Paganism now plays a different role in my life. It is now a tool for connection and healing. I would say I was called to take the leap from solitary Witch to ceremonial leader after encountering the dark night of the soul, otherwise known as a complete collapse in mental health. For a while, crippling anxiety and panic were everyday experiences. Obsessive existential fears controlled my life, and I was lost to depression. The only light at the end of the tunnel was my relationship with my spirituality. In a sense I had to die to be reborn. I had to face my darkest fears in order to overcome them. From that point on I was called to leap deeper into spirituality and discover what I could offer the world. So, this led me to train as a Priest as part of a community of Goddess worshippers in Glastonbury. This was not an easy ride and what began here was a discovery that diversity and inclusion were not a given in Pagan communities. One side of myself, my paganness was fulfilled, but the other, my queerness, was not. What I found was that some spiritual communities are plagued by the same fate that befall many organised religion. A hotbed of transphobia, queerphobia, a lack of basic understanding and essentially a community that could not meet the needs of LGBTQ Pagans, not to mention people of colour or my disabled kin.

I was then pulled towards a new path. A path where queer people were at its centre not the peripheral. Where the focus was on actively developing Pagan practice and ceremony that spoke to diverse people. The path of radical inclusion! We deserve to be able to look into the face of the Divine and see ourselves. To see God as a pregnant trans man. To see Goddess as a disabled woman of colour. To experience connection with a deity who was beyond the binary. And so, my journey has led me to where I am now. Working towards Pagan practice that is fully inclusive and to designing ceremony that celebrates the lives of queer people. And so Indigo Earth Ceremonies was born. I walk my own path, a path of my own creation. The path of Indigo Earth.

Joseph Atiase is Priest of Indigo Earth and can be found at www.indigoearthceremonies.com